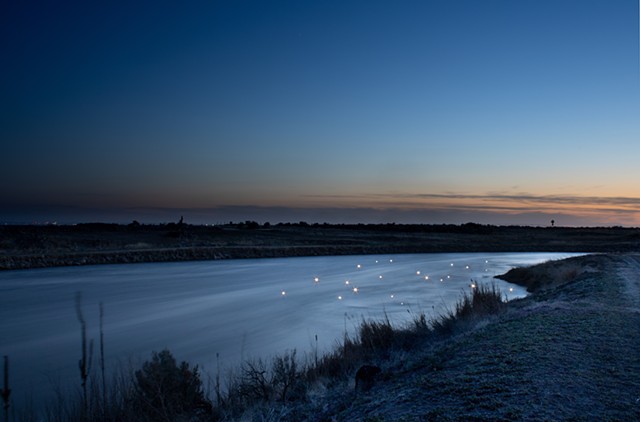 Maboroshi no Hikari (Minidoka North Side Canal)
< previous next >

The Densho website describes two tragedies that occurred at this site: "Many inmates swam in the North Side Canal, which flowed along the southern boundary of the camp, with the tacit approval of the administration. Some also fished in the canal. But in the summer of 1943, tragedy struck twice. Noboru Tada, 11, drowned on June 22, 1943 when he slipped off a rock south of Block 26; Yoshio Tom Tamura, 21, drowned on August 28, 1943, his body recovered by fishermen 2½ miles away. In the aftermath of these deaths, inmates banded together to build a swimming pool that opened later that fall. A second pool was dug near Block 30 in 1944."

Special thanks to the NPS Rangers Kurt Ikeda and Emily Teraoka at the Minidoka National Historic Site for their assistance and enthusiastic support during my time at Minidoka.

To learn more about Minidoka watch this film that is shown at the Minidoka Visitors Center.

The site of the Minidoka American concentration camp is in Idaho whose boundaries include the sovereign lands of the Shoshone-Bannock, Shoshone-Paiute, Coeur d'Alene, Kootenai and Nimiipu (Nez Perce) peoples.