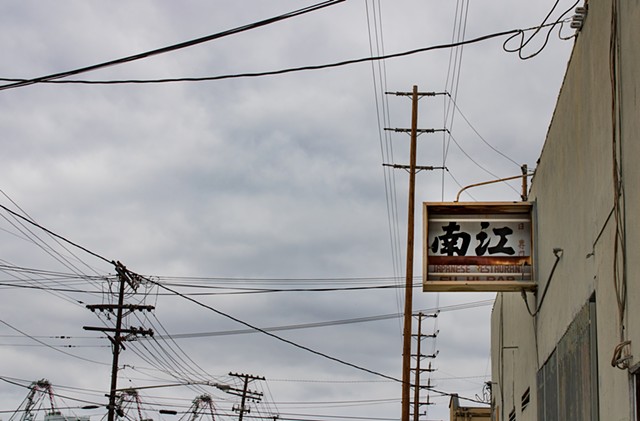 Tuna Street was one of the commercial centers of a Japanese fishing village on Terminal Island. Informally known as Furusato (Home Sweet Home, or old village), this community was home to over 3,500 Issei and Nisei. They had their own dialect, kii-shu-ben. In February 1942, they were forcibly removed, and their homes, belongings and businesses were bulldozed.

Today, it is evident that Tuna Street has gone through a number of transformations in the intervening years, but no businesses are open there now. Google Maps indicates that Harbor Light Restaurant Market, a Korean-Chinese restaurant is next door to this building, and is temporarily closed.

The kanji on this sign faces into the inside of the lightbox. It has been turned around so that the plastic can be repainted and reused. The exterior of the sign (facing away from the camera) advertises a more recent business. This recycling effort has conserved the original sign for Tokiwa Low, a restaurant that served traditional Japanese fare.

Terminal Island is in Los Angeles County which is on Chumash, Tongva, and Kizh land.