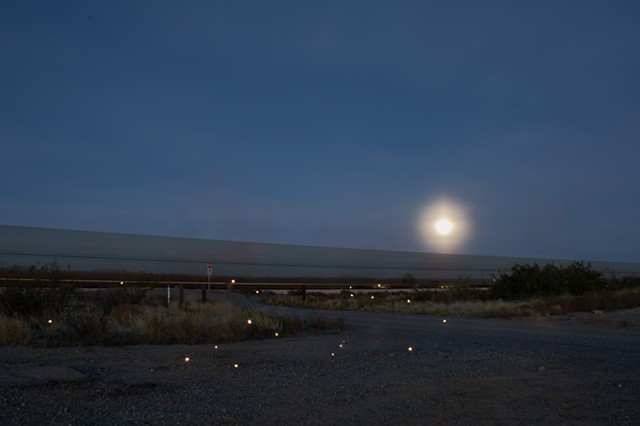 Ulmoris Siding is located just outside of Lordsburg, New Mexico. During the Japanese American incarceration, trains transporting Japanese Issei men would stop here at night. Flanked by armed guards, the men would disembark and march three miles to Camp Lordsburg.

My ojiichan did this on the night of June 28, 1942 when he was transferred to Camp Lordsburg (likely from another U.S. Army camp in Missoula, Montana). There was a full moon that night.

One month later, under another full moon, the infamous Lordsburg Killings occurred. This image was made on October 31, 2020 under a full moon. It is a single, long exposure; I create the lights using a small flashlight.

The term "maboroshi no hikari" means "phantom light" and is related to a metaphor in a short story of the same name by Teru Miyamoto, in which a shimmering light on the water lures people into the perilous sea.

I owe a debt of gratitude to local historian and teacher Mrs. Mollie Pressler. She has generously shared decades of research, a bounty of archival materials, and acted as a guide and fixer during my time in Lordsburg. Thanks are also due to the people of Lordsburg who have been hospitable, helpful and have made me feel welcome. Without the Japanese American National Museum archives and docents, I would not know that my ojiichan had been interned at Lordsburg.